Pennsylvania Department of Health (DOH) has identified recent sustained increases in tick bite-related emergency department visits in nearly all regions of the state. This trend is expected, as tick exposures in Pennsylvania generally increase during spring and summer months, and it serves as an important reminder that tickborne diseases occur annually in Pennsylvania. From April through September, health care providers should have a heightened clinical suspicion for tickborne diseases.

PENNSYLVANIA TICK SURVEILLANCE DATA
A 2015 Pennsylvania Department of Environmental Protection study documented the presence of Ixodes scapularis (known commonly as the blacklegged tick or deer tick) infected with Borrelia burgdorferi (the bacterium that causes LD) in all 67 Pennsylvania counties.

EPIDEMIOLOGY OF TICKBORNE DISEASES IN PENNSYLVANIA
LD is the most commonly reported tickborne disease in Pennsylvania and is usually seen during the months of May through September throughout the Commonwealth. Pennsylvania ranked third nationally in LD incidence rate (93.1 per 100,000 persons) during 2017, more than seven times higher than the overall national rate (13.1 per 100,000 persons). Several other non-Lyme tickborne diseases also occur annually in Pennsylvania, including anaplasmosis, babesiosis, ehrlichiosis, and spotted fever rickettsiosis. Additionally, one case of Powassan virus disease, a tickborne arbovirus, were documented in northeastern Pennsylvania during 2018. During 2017, four cases of Powassan virus were reported. Although not yet identified in Pennsylvania, cases of Heartland and Bourbon viruses have been identified following Lone Star tick bites in the United States. Lone Star ticks are established in some areas of Pennsylvania.

DIAGNOSIS AND TREATMENT OF TICKBORNE DISEASES
The Centers for Disease Control and Prevention (CDC) has produced a reference manual for health care providers that provides comprehensive information on tick identification, disease distribution, clinical signs and symptoms, laboratory testing, and treatment for the tickborne diseases that are endemic to North America. This manual is freely available at: https://www.cdc.gov/lyme/resources/TickborneDiseases.pdf

LABORATORY INFORMATION
The BOL is expanding its capacity for LD testing for all uninsured or underinsured PA residents. Other requests will be considered case by case. Since Lyme is endemic, DOH wants to ensure all the commonwealth residents have access to this important testing.

Specimens from patients suspected with LD infection may be submitted to the BOL for screening and confirmatory testing of LD. A healthcare provider’s order and BOL Lyme Disease testing form (https://www.health.pa.gov/topics/Documents/Laboratories/BOL%20Micro%20Specimen%20Submission%20Form.pdf) must accompany the serum sample. For access to the specimen collection guidance document, contact the BOL at 484-870-6416 or [email protected].

BOL employs a two-step serological process consistent with what CDC recommends. This process tests blood for evidence of antibodies against the LD bacteria. Both steps can be done using the same blood sample (see below). The two steps of LD testing are designed to be done together. CDC does not recommend skipping the first test and only doing the Western blot. Doing so will increase the frequency of false positive results and may lead to misdiagnosis and improper treatment. 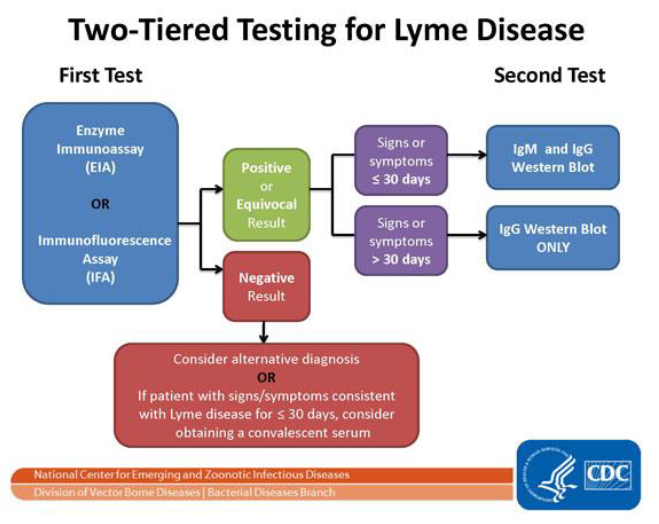 TICK BITE PREVENTION AND TICK REMOVAL
Individuals with exposure to wooded and brushy areas with high grass and leaf litter are at greatest risk of tick exposure. It is important to remind patients to reduce the likelihood of a tick bite by:

If an attached tick is found, it should be promptly removed using fine-tipped tweezers. The tick should be grasped as close to the skin’s surface as possible and pulled upward with steady, even pressure. CDC’s directions for tick removal can be found here: https://www.cdc.gov/lyme/removal/index.html.

It is common for individuals who remove a tick to want it to be tested. However, testing of individual ticks is discouraged because of the following reasons:

This information is current as of April 12, 2019 but may be modified in the future.

Originally released by the Pennsylvania Department of Health on April 12, 2019