In September 2018, the Philadelphia Department of Public Health identified an increase in the number of new HIV infections among people who inject drugs (PWID). Since then the number of new HIV diagnoses among PWID, including injectors who have sex with men (MSM/PWID), has continued to rise. In 2018, there were 71 newly diagnosed cases of HIV among PWID, a 115% increase from 33 cases in 2016. The majority (86%) were HIV, non-AIDS at the time of diagnosis, suggesting more recently acquired HIV infection. Many of the new PWID diagnoses have been identified in Emergency Departments and jail settings. Co-infection with hepatitis C (63%) and hepatitis B (14%) are common among newly diagnosed cases. This increase is likely an effect of the opioid crisis with increasing availability and use of fentanyl, higher injection frequency among PWID, and a rise in homelessness among populations at risk for HIV exposure.
Efforts are needed from the healthcare community to interrupt this outbreak. PDPH is calling on providers to: 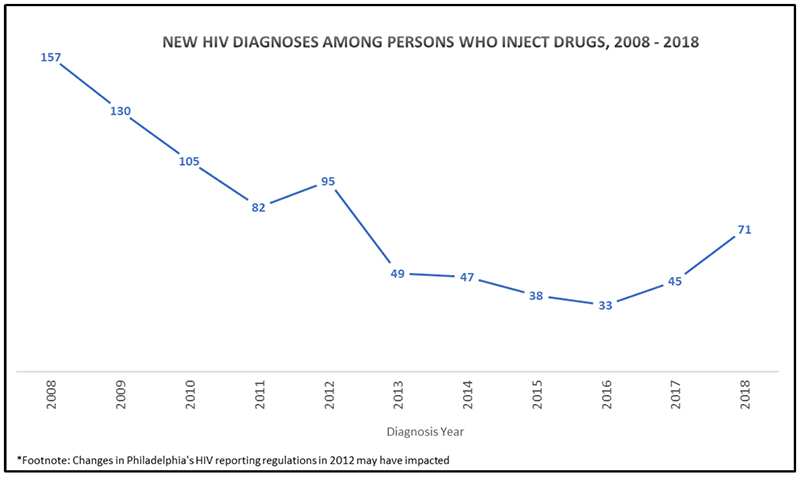 Prior to this outbreak, the number of new HIV infections among PWID in Philadelphia had been falling since the implementation of the syringe exchange program in 1992. However, the opioid crisis has fostered HIV transmission in a local population that has not recently experienced high rates of HIV. This increase in newly diagnosed HIV among PWID presents a renewed risk for HIV infection among PWID and their partners. Investigation of newly diagnosed cases is ongoing and pertinent services such as linkage to care and harm reduction solutions are being offered to all affected persons.

Originally released by the Philadelphia Department of Public Health on October 16, 2019