The deadline to nominate a physician for one of the Pennsylvania Medical Society’s annual awards is fast approaching. If you would like to nominate a physician for PAMED’s Distinguished Service, Top Physicians Under 40, or Community Voluntary Service awards, please submit your nomination by Jan. 15, 2023. Everyday Hero Award nominations are accepted throughout the year. You can learn more and begin the nomination process at: https://www.pamedsoc.org/membership/awards

PAMED Everyday Hero Award
Do you know a Pennsylvania physician who goes above and beyond in helping patients? The Pennsylvania Medical Society encourages nominations for this monthly, member award. 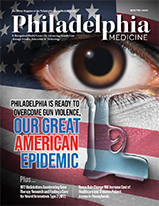